This is opposed to the usual base-superstructure formulation of the relationship between ideal and material forces. With this foundation we are able to extract some additional features of cultural studies as an approach to understanding society and media. As seen in the work of Hoggart, cultural studies is interested in understanding real, material consequences of cultural objects.

Rather than theorize about the implications of media on the changing character of the working class, Hoggart looked at the cultural objects and the culture itself to better understand what was happening. Further, Hoggart was sure to point out the human agency of the individuals that constitute the working class. From this observation he made the claim that these class members are aware of the media and actively interpret it, rather than passively accept it. Williams sought to make the point that culture should be understood as a whole rather than as a set of isolated objects.

Cultural studies in general, as seen in Hoggart and Williams, takes a humanist position wherein experience is what constitutes authenticity, rather than authenticity deriving from status as a museum object as had been the usual understanding before cultural studies. Additionally, Williams spent time reworking a number of old concepts such as, base-superstructure and hegemony. He made the point that although the ideologies and culture of the ruling class is nearly ubiquitous in society, thus hegemonic, the fact that hegemony is a constant process and struggle for position means there are ways in which the subordinated classes can actively resist.

It is here that Williams sets the stage for the liberatory potential of the means of communication. In Means of Communication as Means of Production , Williams acknowledges that there are problems of access and control to the means of amplification radio, broadcast, etc. Even though these restrictions licensing, capital cost, and the like exist, Williams believes the use of amplificatory and durational means of communication contain great potential as tools of liberation for the subordinated classes, as long as the means of access can be achieved.

Cultural studies approaches the question of media power in two separate, though related, ways. The first, following Hoggart, examines the real impact of media on the individuals consuming it. Though media messages are important, what is equally, if not more, important for this line of cultural studies is the resilience of the consumer and the ability for them to adapt and interpret the messages and material they are given.

There are a number of different characteristics education, moral character, etc.


The second approach is more associated with Williams. This approach understands cultural as a whole and interactive process while also looking for places that groups can directly resist the hegemony of the ruling class. This goes beyond the resilience that Hoggart noted, it advocates for active resistance for the sake of liberation rather than resistance for the sake of cultural conservatism. The case of surveillance is in some ways at odds with the agency given to the working class by Hoggart. 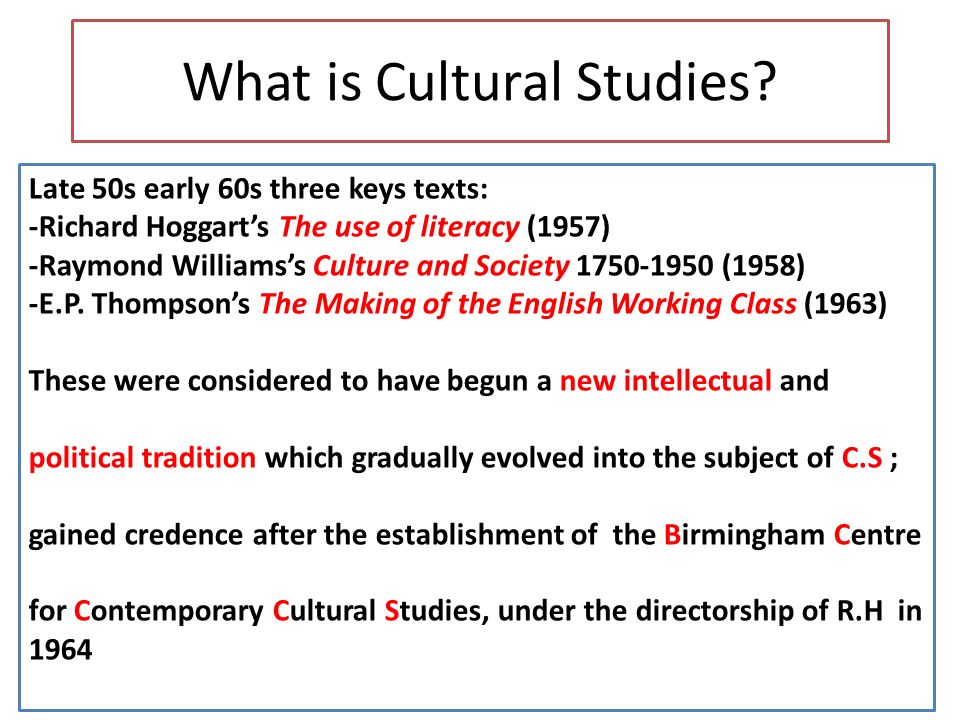 He believes that working-class individuals can often resist various mediated impositions on their culture. However, there is little resistance to surveillance by the working class. While there is a fair amount of critique of domestic surveillance in the written media newspapers, magazines, etc. Amplificatory systems, on the other hand, are easily accessible for the working class and their messages easily received.

Indeed, these system have the appearance of being a direct transmission because the processes of editing the video footage and audio is obscured by the presentation. The amplificatory systems are qualitatively similar to the direct interactions and therefore retain legitimacy. Further, Williams suggests that modes of naturalization of television, film, and radio are tremendously powerful, and that news generations are increasingly habituated to them.

Though Williams is talking primarily of the ways that certain communicative forms hide the real relations of production and relations of men, the point still stands that certain communicative systems have the ability to push on individuals with little critical pushback. From this it could be suspected that the working class are not more resistant to domestic surveillance because the media they consume is not critical of it.

That is, there is a certain power in the withholding of messages from particular mediums and from particular classes. This is almost always in the interest of ruling class, just as there is a ruling class interest in producing and broadcasting certain messages on certain mediums to certain groups. To understand the power of the media in relation to surveillance and the failure of resistance in the working class, cultural studies would not only ask about what messages are being created, but also what messages are being withheld, who is doing the withholding, and what real effect does it have on the individuals that constitute the working class.

Gunster, S. I have found myself wondering what Hall would make of how cultural criticism of a sort that can read like ideological pattern-recognition has proliferated in the age of social media. Over the course of his lectures, Hall carefully wrestles with forebears, including the British scholar F. Instead, they try to show how far back these questions reach. Hall was born in , in Kingston. His father, Herman, was the first nonwhite person to hold a senior position with the Jamaican office of United Fruit, an American farming and agricultural corporation; his mother, Jessie, was mixed-race.

In , Hall won a Rhodes Scholarship to study at Oxford. Although Hall came from a different class than most of these migrants, he felt a connection to his countrymen. He clipped a newspaper photo of three Jamaicans who arrived around the time he did. Two of them are carpenters and one is an aspiring boxer; they are all dressed to the nines. They were on a mission, determined to be recognized as participants in the modern world and to make it theirs. Why not share!

Cultural Studies Texts - The Uses of Literacy by Richard Hoggart ()

go site This page intentionally left blank 4. No reproduction, copy or transmission of thispublication may be made without written permission. No portion of this publication may be reproduced, copied or transmittedsave with written permission or in accordance with the provisions of theCopyright, Designs and Patents Act , or under the terms of any licencepermitting limited copying issued by the Copyright Licensing Agency,Saffron House, Kirby Street, London EC1N 8TS.

Any person who does any unauthorized act in relation to this publicationmay be liable to criminal prosecution and civil claims for damages. The authors have asserted their rights to be identifiedas the authors of this work in accordance with the Copyright,Designs and Patents Act Palgrave Macmillan is the global academic imprint of the above companiesand has companies and representatives throughout the world.

ISBN —0———8 hardbackISBN 0———9 hardbackThis book is printed on paper suitable for recycling and made from fullymanaged and sustained forest sources. Logging, pulping and manufacturingprocesses are expected to conform to the environmental regulations of thecountry of origin. A catalogue record for this book is available from the British Library. Includes index. ISBN —0———8 alk. Hoggart, Richard, —Influence.